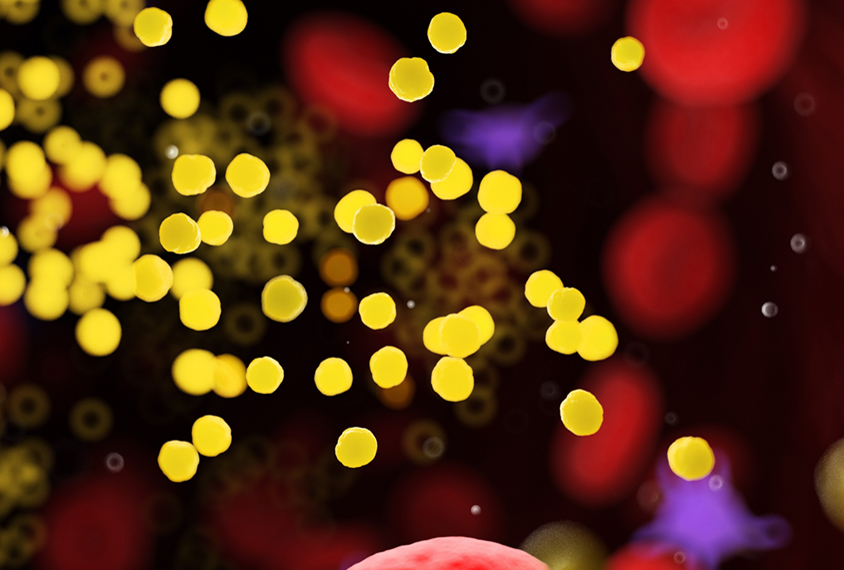 Blood biomarker: Levels of lipids, such as cholesterol and triglycerides, may be altered in a subgroup of people with autism.

Nearly 7 percent of autistic people in the United States have abnormal blood levels of fatty compounds called lipids, according to a study published today in Nature Medicine1. The study’s approach, drawing on multiple datasets, could help researchers parse autism into subtypes, the researchers say.

Past studies have shown a link between this metabolic condition, called dyslipidemia, and autism in people with rare genetic conditions2. But this is the first in-depth, multidimensional analysis to establish a robust association with autism more broadly, says Yuan Luo, study investigator and associate professor of preventive medicine at Northwestern University in Chicago, Illinois.

“Using one modality gives you only one perspective, whereas using multiple modalities gives you a holistic perspective,” he says.

The new work may also help clinicians identify biological markers for screening autistic children early in development, rather than relying on behavioral traits.

“This is important because currently autism diagnosis is only based on symptoms. But when you actually see these symptoms, it’s already too late,” Luo says. “[These findings] could be of immediate clinical utility, and we plan to directly test those by future studies, including clinical trials.”

First the team mapped out how genes work in concert during prenatal human brain development, a critical time window for autism. They used the BrainSpan online atlas to obtain data on the expression patterns of exons — the parts of genes that code for proteins — in 26 brain regions. They then narrowed in on clusters of exons that are expressed differently between boys and girls, given sex differences seen in autism.

Next, the researchers identified autism-related mutations found in the exons of autistic people. To do so, they searched a database of genetic sequences for 3,531 people from 50 families with two to five autistic children, looking for mutations shared by all autistic siblings within each family, as well as 1,704 families with autistic and unaffected sibling pairs, focusing on the mutations found only in the children with autism.

They then looked for overlaps between the exon clusters identified via the atlas and those with autism mutations, identifying 33 in common. Some contain the exons of genes involved in lipid protein regulation; mutations in them could lead to low levels of lipoproteins, cholesterol and triglycerides in the blood. The findings point to a possible association between autism and dyslipidemia, the researchers say.

To test this theory, the team analyzed medical records of 2.75 million people at Boston Children’s Hospital in Massachusetts, 25,514 of whom are children with autism. As a group, autistic children show significant alterations in blood lipid profiles compared with age-matched controls. For example, children with autism have higher triglyceride levels, regardless of age, medication, sex or metabolic conditions, such as obesity or diabetes.

The team examined healthcare claims for more than 34 million people across the United States, including 80,714 autistic people. They found that 6.6 percent of people with autism have dyslipidemia.

The study also found that parents with a history of dyslipidemia have up to a 16 percent greater odds of having autistic children — a result the researchers hope to investigate further in future studies, Luo says.

The findings jibe with previous research showing that dyslipidemia-associated genes are involved with several mechanisms key to neuronal function, such as controlled cell death.

However, it’s still unclear how lipids may affect the human brain, says Michael Snyder, professor of genetics at Stanford University in Palo Alto, California, who was not involved in the study. More research manipulating lipid levels — by either knocking out dyslipidemia-associated genes in mice or using medication — may offer a clearer understanding of this association.

In particular, researchers should try using lipid-lowering drugs, such as statins, in autistic people with dyslipidemia to determine whether the treatment improves their lipid levels and eases autism traits, Snyder says.