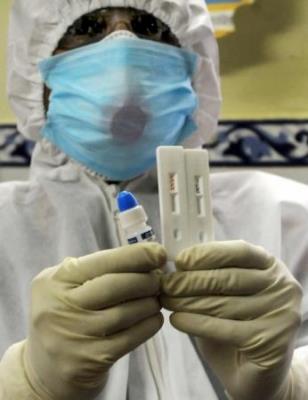 London, Nov 16 (IANS) The accuracy of a rapid finger-prick antibody test for SARS-CoV-2, the virus responsible for Covid-19 infection, may be considerably lower than previously suggested, say researchers.

The results, published in the journal The BMJ, suggest that if 10 people of people given the test had previously been infected, around one in five positive test results would be incorrect (false positive results).

“These conclusions contrast with an earlier (not yet peer reviewed) study suggesting that the test gives no false positive results,” said study authors from Imperial College London in the UK.

The findings suggest the test can deliver a sufficient degree of accuracy for surveillance studies of the population, but laboratory confirmation of positive results is likely to be needed if these tests are to be used to provide evidence of protection from the virus.

The AbC-19TM Rapid Test uses a drop of blood from a finger-prick to see if it’s likely that someone has previously been infected with SARS-CoV-2.

It gives results in 20 minutes, without the need to go to a laboratory, and is approved for use by health professionals in the UK and EU.

For the results, scientists tested blood samples in a laboratory from 2,847 key workers (healthcare, fire, and police staff) in England.

Of these, 268 had a previous PCR (positive polymerase-chain reaction) positive result so were ‘known positives’ while the remaining 2,579 had unknown previous infection status.

Based on a series of analyses, the researchers estimated the specificity of the AbC-19 test (ability to correctly identify a true negative sample) to be 97.9 per cent, meaning that 2.1 per cent of people who did not have a previous SARS-Cov-2 infection incorrectly tested positive.

They estimated the sensitivity of the AbC-19 test to be 92.5 per cent based on PCR confirmed cases but considerably lower (84.7 per cent) in people with unknown previous infection status prior to antibody testing.

This difference is probably due to the test being more sensitive when antibody levels are higher, the researchers explained .

As people with a positive PCR result tended to have more severe disease, it is likely that they would have produced more antibodies.

The researchers said that the lower figure of 84.7 per cent is probably a more realistic estimate of test sensitivity in the real world, if people were to choose to take the test to find out their own previous infection status.

“This means that 15.3 per cent of people with a previous SARS-CoV-2 infection would be missed,” the authors noted.

Legal Disclaimer: MENAFN provides the information “as is” without warranty of any kind. We do not accept any responsibility or liability for the accuracy, content, images, videos, licenses, completeness, legality, or reliability of the information contained in this article. If you have any complaints or copyright issues related to this article, kindly contact the provider above.