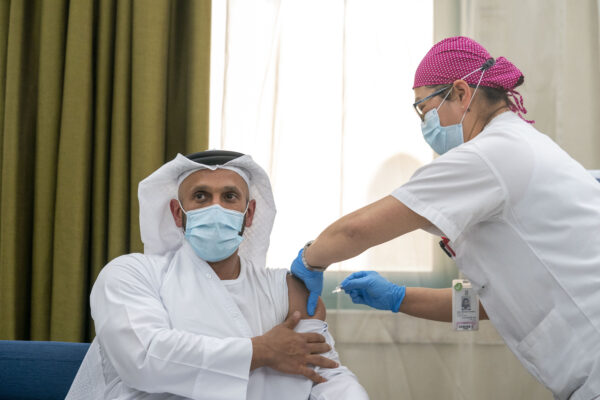 A Chinese firm has started what it calls the first ever Phase III trial of a Covid-19 vaccine that uses inactivated virus.

Beijing-based Sinopharm CNBG dosed the first participant in its trial in Abu Dhabi, part of the United Arab Emirates. The first person dosed was the chairman of the emirate’s Department of Health, Abdullah bin Mohammed Al Hamed. According to G42 Healthcare, which made the announcement, the UAE was chosen because of its ethnic diversity, being home to people from more than 200 nationalities, which aids the collection of data to determine feasibility for taking the vaccine global. The trial will be able to enroll up to 15,000 volunteers, under the permit issued by the UAE’s health authorities.

“The UAE is a nation of innovation and tolerance, home to individuals from every part of the world and ethnic background,” Sinopharm CNBG president for biological products Jingjin Zhu said in a statement. “We will work closely with our partner, G42 Healthcare, with the support of the Abu Dhabi health authorities to complete these clinical trials and make this vaccine available to people in need worldwide.”

The announcement noted that the vaccine has successfully completed Phase I/II testing and shown an ability to produce antibody responses in participants. Nevertheless, while many vaccines have been able to produce such responses, it remains to be seen whether they can produce long-term immunity.

The World Health Organization lists 23 vaccines against SARS-CoV-2, the virus that causes Covid-19, that are currently in clinical development worldwide. However, while it includes the Sinovac trial among those that are in Phase III, the list that was online Friday was current as of Wednesday and still states that the Sinopharm CNBG vaccine is in Phase I/II development. Other vaccines listed as being in Phase III development include Moderna’s mRNA-1273, which is entering a Phase III trial on July 27, as well as ChAdOx1-S, which is being developed by London-based AstraZeneca and the University of Oxford.