The Health Ministry announced on Sunday that there were fewer than 8,000 coronavirus tests carried out the previous day, a significant drop compared to testing levels over recent weeks during the renewed outbreak of the pandemic. Meanwhile, the number of patients in serious condition continued to rise.

There were just 625 new coronavirus cases recorded on Saturday, bringing the number of infections since the start of the pandemic to 72,315.

The Coronavirus National Information and Knowledge Center, operating under the IDF Military Intelligence Directorate in cooperation with the Health Ministry, said that it believed the number of new cases was artificially lower due to the testing rate of just 7,739.


“The number of tests, very low even compared to previous weekends, has led to a particularly low number of new verified patients. In our estimation, this figure does not reflect the true picture of infection,” the task force said in a Sunday report. 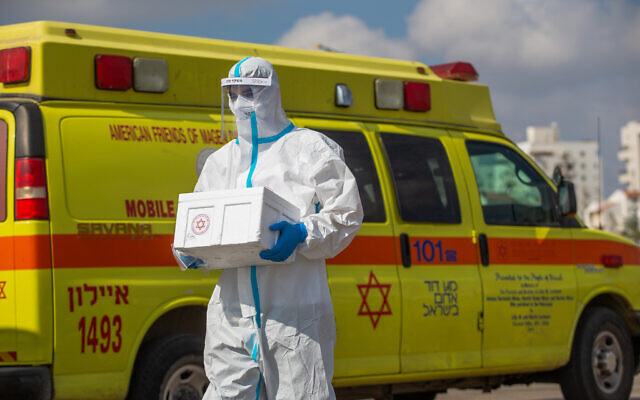 Magen David Adom medical workers test Israelis for the coronavirus at a drive-through site in Lod, on July 10, 2020. (Yossi Aloni/Flash90)

The Health Ministry said Sunday a five more people had died since Saturday evening, taking the national death toll to 531. There were 14 COVID-19 fatalities recorded between sundown on Friday evening and Saturday night, matching a previous 24-hour high toll last seen in mid-April at the height of the first wave of the pandemic.

Of the 26,153 active cases, 340 people were in serious condition, up from 328 Saturday night (with 96 on ventilators). Another 153 people were in moderate condition and the rest had mild symptoms or were asymptomatic.

The Health Ministry also announced there was a fresh outbreak at the King Solomon nursing home in Bnei Brak, which was discovered after a carer fell ill last week. Testing led  led to the discovery of a further eight residents who were infected with the virus but were asymptomatic. 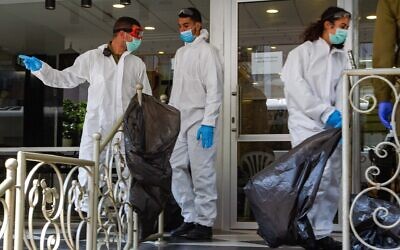 Soldiers of the Home Front Command Unit wearing full protective clothing at a nursing home in the city of Bnei Brak, April 14, 2020. (Flash90)

The ministry said that as long as the residents remained asymptomatic, they would stay at the nursing home rather than be transferred to a hospital, as it was believed to be the safest option given their fragile physical and mental states.

At the height of the first wave of the outbreak, the coronavirus spread quickly in nursing homes around the country, and at one stage was responsible for around a third of the national death toll.

Meanwhile, Channel 13 news reported the Health Ministry has decided that the quarantine period for those who recover from the virus will be changed to 14 days from when they are tested, if the result is negative, rather than 14 days from the time the negative test results are received. This is expected to shorten quarantine time for recovering patients.

There was no official announcement on the matter.