A notice from the World Organisation For Animal Health Website reports that the farm, situated in Lethbridge township, saw more than 21,750 birds out of its 43,000 population hit with avian influenza.

However, the Victoria state Department of Health and Human Services has released a statement. The H7N7 is currently “not a risk to the public as it rarely affects humans unless there is direct and close contact with sick birds.” 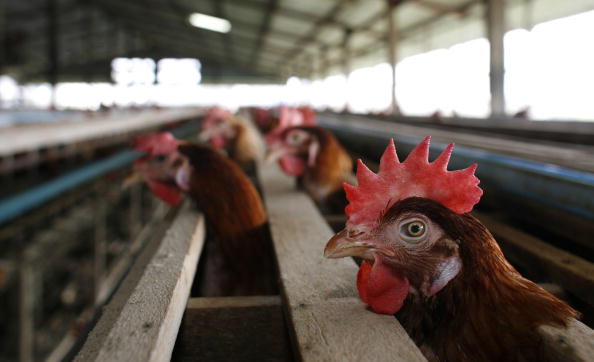 (Photo: Photo by Paula Bronstein/Getty Images)
SUPHANBURI, THAILAND – JANUARY 27: A chicken peers out from a cage at the Sanoh chicken farm on January 27, 2007, in Suphanburi, Thailand.

H7N7 is a subtype of the Influenza A virus, under the Orthomyxoviridae family. Aside from birds, like chickens, the flu-causing strain also affects pigs, seals, horses, and even humans. There are highly pathogenic strains, and low pathogenic strains of the virus exist. The onset of symptoms from the strain includes an influenza-like illness, fever, and any of the following – cough, rhinorrhoea, myalgia, sore throat, or headache.

A study from Italian researchers, together with the Influenza Task Force, has found out that the viruses found in humans are closely related to those found in chickens. In between August and September 2013, H7N7 was found in three poultry workers who contracted conjunctivitis. Their molecular findings from the sample suggest a direct transmission between chickens and humans, but not necessarily human to human.

In the last decade alone, there have been two recorded incidents of H7N7 in chickens. In 2013, lab tests are done in chickens found in markets in Wenzhou, Zhejiang in China revealed H7N7. Scientists were testing for another influenza strain, H7N9, when they detected the virus. The international team is led by a flue specialist from the University of Hong Kong. In March 2013, the H7N9 virus was found also in China, leading to the temporary closure of live poultry farms. However, the outbreak apparently was lost and farms started opening several weeks after the closure. The WHO Assistant Director at the time, Keiji Fukuda, expressed disagreement with the virus that had just “simply disappeared.”

Two years later, in 2015, a similar case of an H7N7 was found among chickens in a live poultry farm in Lancashire, in England. A six-mile surveillance zone encircles a 1.8-mile protection zone inside, with the farm at the center. The safety precautions in place, according to Public Health England’s National Infections Service, were from the 2003 Netherlands outbreak that led to the death of a veterinarian who was working on containing the outbreak.

A recent study, published last March in the Infection, Genetics, and Evolution journal isolated a low pathogenic strain of the H7N7 bird flu from the southern parts of Vietnam. Captured from the country’s annual surveillance of bird flu viruses, three domestic ducks were found to have H7N7. The study showed the H7N7 strain was not related to the H7N9 virus previously found in fowls in China.

©2017 ScienceTimes.com All rights reserved. Do not reproduce without permission. The window to the world of
science times.